Bulgy is the 75th Episode of Thomas and Friends

A special holiday is being celebrated and many visitors are travelling on Duck's Branch Line. Bertie and the engines are all kept very busy taking them to and from their destinations. One day, Duck is waiting at Tidmouth when he spots a large and unfriendly looking double-decker bus. The bus grumbles as he sees the happy passengers boarding Duck's train and states he wouldn't have bought them had he known they'd be travelling on a railway. He bluntly tells Duck that one day, the railways will be torn up and replaced by roads. Duck is shocked by this; Bertie would never have made such claims.

At Haultraugh, Duck meets Oliver and tells him about the bus. Oliver explains that he calls the bus "Bulgy" and simply laughs off his threats. That afternoon, however, Oliver is much more serious; since another equally rude bus has arrived and is taking Bulgy's passengers so Bulgy himself can take Duck's to the big station. Duck insists that the route is quicker by rail, but Oliver explains that Bulgy apparently knows a shortcut.

Later, Duck prepares for the afternoon rush, but is surprised to discover he has no passengers. Then, Oliver spots them in Bulgy, who has a sign on his side claiming he is a Railway Bus. Bulgy leaves and Duck quickly follows after him. Sometime later, he is flagged down at a bridge where the line crosses a narrow road, where he discovers that Bulgy has wedged himself under the bridge. The passengers explain that they had been tricked and Bulgy wanted them to think railways were no good. Duck and his crew agree that helping the passengers outweighs the risk of the damaged bridge and carefully cross it. Bulgy begs him to stop, fearing it might collapse on top of him. It doesn't, but Duck states it would have served him right for lying if it had.

Duck soon arrives back at the big station and all his passengers catch their trains on time. The bridge is eventually repaired, but Bulgy's ways remain unchanged until he is eventually taken out of service. He is now a henhouse in the field beside the bridge and any lies he does tell are ignored by the resident chickens. 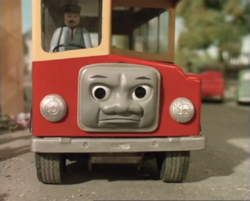 Retrieved from "https://abcforkids.fandom.com/wiki/Bulgy_(episode)?oldid=104308"
Community content is available under CC-BY-SA unless otherwise noted.