Bulldog is the 81st episode of Thomas And Friends

One morning, Percy is feeling very impatient. He has a new coat of paint and is very eager to show it off and complains that his driver is late. Gordon and James remind him the driver is not late, rather Percy is awake early. Thomas assures Percy it will soon be time for work, but warns him not to be impatient otherwise he may run into danger and Duke will not be there to save him. The other engines are surprised to hear their hero mentioned and Thomas decides to tell them a story his driver told him...

Long ago on the Mid Sodor Railway, back when Sir Handel was still called Falcon and Peter Sam was still called Stuart, the two worked alongside Duke. One day the manager came along and told Falcon, who was still new and had a lot to learn, that he was pleased with his work but now wanted the engine to learn about the Mountain Road, which was a difficult part of the line. The next day, Falcon would get a new coat of paint, then go on the Mountain Road with Duke to double-head a train. Falcon was not impressed that he was having to work with Duke, who he considered a fusspot.

The next day, Duke told Falcon he would head the train since the Mountain Road is tricky to travel over. Falcon refused and insisted on going in front, telling Duke he did not want the view blocked. Duke warned Falcon not to admire the view since he needed to watch the track and also tried to slow them down to keep them safe, but Falcon ignored Duke thinking he was fussing over nothing.

Soon the engines approached a curved tunnel, which Falcon did not like. He rushed through and the journey initially seemed normal, but he derailed and dangled precariously over a precipice. Duke held on to Falcon for dear life, as their crews quickly worked to anchor the two engines to the line. However, Duke's fireman found more problems; Duke was low on water. Luckily for them, a workman's cottage was nearby and all the passengers assisted in fetching water. Duke's tank was soon refilled, and he managed to build up enough steam to pull Falcon back onto the track.

The manager was waiting for the train at the top station, and when Duke and Falcon arrived the passengers told him that Duke was a hero who would not let go of Falcon, who thanked Duke for saving him, especially as he had been so rude to him. Duke was modest and told Falcon that it would have been a shame if his new coat of paint had been spoilt. 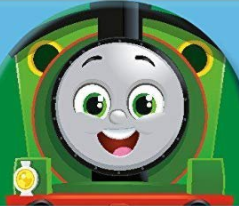