Steve Asquith
Calling All Engines is a 2005 Thomas and Friends special.

One summer day on the Island of Sodor, the Fat Controller announces to the engines that a new airport is to be built on Sodor for more holiday makers. As Thomas and Percy are working, the Diesel engines, 'Arry and Bert come and biff their trucks into Thomas and Percy, making them feel uncomfortable. Thomas decides to fool the Diesels because he thinks that they are better than the steam engines. At the Timberyard, when Arry and Bert have a very important job, Thomas biffs their trucks so hard that the timber falls onto the tracks, and he runs off, laughing. While Thomas and Percy are playing around in the yard biffing cars, Diesel come and confronts them saying that they should not mess with Arry and Bert. But Thomas has another idea and fools Diesel by giving him bananas for his job. At sundown when Thomas and Percy arrives at Tidmouth Sheds to rest, they realize that the sheds did not get rebuilt (after destruction) on time due to Diesel’s dilemma. As a result, all the engines are forced to sleep on different parts on the Island; James stays at the coal mine, Edward stays at the quarry with Diesel, Percy and Henry stay at the smelters yard, Gordon stays under a tent, Toby stays at his own shed, and Thomas stays at Knapford shed with Emily. That night, a fierce storm sweeps across the Island and the Sodor Suspension Bridge collapses. The next morning, the Fat Controller tells the engines that the damage has to be cleared before the work can continue. While working, the steam engines and the Diesels do not talk to each other whether the blame was neither the two.

One day, Thomas has to collect a beam for the Sodor Suspension Bridge to be placed. It is heavy and hard work and an exhausted Thomas is nearly unable to carry it, but using all his strength, he manages to lower the beams into place. Later when Thomas goes to the yard to collect paint for the bridge, Diesel biffs Thomas' flatbed so hard that the paint splashes all over Thomas. The event escalates until all the engines are fighting, and at the end of the day, the engines are dirty and need a washdown and no work is finished. That evening, The Fat Controller furiously tells the engines that no holiday makers will come to Sodor. Most of the engines dream about having humiliating fates if that happens, but Thomas dreams that he sees his crush Lady the Magical Engine telling him about the need for teamwork and as soon as he wakes up the next morning, he finds Mavis and tells her to set up a meeting for the engines. That day, the engines finally put their differences aside and begin working together on the airport.

Very soon, the airport is complete and the first aeroplane is sent to Sodor, but Thomas with his trucks accidentally causes the water tower to fall onto the runway, cracking it in the process. While the workmen repair the runway, they need George to finish the job, but Thomas can’t go over the mess and with even Harvey coming too late to clean it himself, he gathers his courage to ask Diesel 10 for help. Thomas was afraid of Diesel 10 at first because of his claw, but asking for help is the only way to save the airport. Diesel 10 is hesitant at first when Thomas asks, but Diesel 10 accepts Thomas’ offer about his situation. He eventually follows Thomas to the airport and clears the mess. With the aid of even 'Arry and Bert, Thomas collects George to fix the runway and the aeroplane lands at last. That evening, the engines are happy to see Tidmouth Sheds rebuilt, especially for Emily when she finds that an extra berth is built for her.

All the members of "The Steam Team" (the main cast of characters as portrayed since Season 8) make appearances in the film. Diesels with major roles include Diesel, Mavis, 'Arry, and Bert. Various supporting characters make appearances in the feature's music videos. Daisy makes her first appearance in the series since Season 4, and Derek appears for the first time outside of "Double Teething Troubles" from Season 5. 2 engines introduced in Thomas and the Magic Railroad, Lady and Diesel 10 play minor roles in the film. 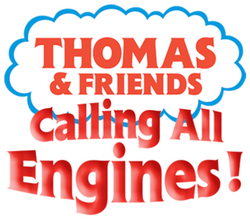