ABC For Kids Wiki
Register
Don't have an account?
Sign In
Advertisement
in: Thomas & Friends episodes, Episodes, 1987,
and 5 more

Down The Mine is the 25th episode of Thomas and Friends.

One day while Thomas is waiting at the junction, Gordon, who is in disgrace after recently causing trouble by falling into a ditch, pulls in with some trucks. As soon as Gordon stops, Thomas jokes about him smelling of ditch water. Before Gordon can respond, Thomas leaves with his coaches.

Annie and Clarabel are shocked at Thomas' behaviour, and scold him for it. Thomas is pleased with his clever joke though and heads off to collect trucks at the lead mines, leaving his coaches still in shock. The mine was made a long time ago by miners who made tunnels under the ground. The roofs of the tunnels are strong enough to hold up trucks but not engines. At the points, there is a "Danger" board warning engines not to enter the area.

Thomas has often tried to pass the board, but has always failed. This time however, he has made a plan. When his fireman leaves the cab to change the points, Thomas bumps the trucks hard and knocks his driver off the footplate allowing him to pass the board. Then he moves over the unsafe rails, which collapse and leave him lodged in a chasm, and feeling very silly.

Then The Fat Controller arrives, having seen everything. After telling Thomas off for his naughtiness, he begins to think about how to get Thomas out. A crane would be too heavy for the ground to support, so he decides to call in Gordon to pull Thomas out. Thomas feels uneasy about this, given how much he laughed at Gordon for his own accident.

Shortly afterward with a winch attached to his buffer beam, Gordon heads to the rescue feeling much happier after hearing about Thomas' situation. Arriving at the scene, Gordon promises to get Thomas out "in a couple of puffs". A long steel cable is fastened between them and after a lot of hard work and pulling, Gordon is able to finally get Thomas out of the chasm.

Thomas tells Gordon how sorry he is for his cheekiness earlier. Gordon accepts Thomas' apology and tells him that he found his joke very funny. Now both engines are in disgrace, so they agree to form an alliance and help each other in the future. With that, the two engines are coupled together and head back to the shed. 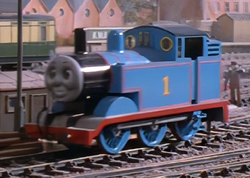