Henry and the Elephant

Henry and The Elephant is the 97th episode of Thomas and Friends.

One morning, Gordon, Henry and James are in a bad mood - with Thomas running his branch line and Percy nowhere to be found, they are forced to collect their own coaches. James decides to take out his anger on Henry and mocks him about his fear of the rain. Henry retorts that James looks like he belongs in a circus, which leads Percy, who has just arrived, to believe the engines have heard about the circus that has come to town. He explains that he had been helping to shunt the special trucks and coaches on the Fat Controller's request. The big engines soon forget to be cross and eagerly help out too. When it is time for the circus to leave, James is given the task of pulling the train away, making Gordon and Henry cross once again.

Later that day, the Fat Controller informs Henry that a tunnel is blocked and asks him to take some workmen to investigate. Henry arrives at the tunnel, grumbling all the way, and the workmen enter to examine the blockage. A few moments later, they quickly run out in horror. One explains to the foreman that the blockage is alive and they refuse to go back inside. The foreman does not believe them and decides to have Henry push it out. Henry, horrified of the idea of being stuck in a tunnel with something big and alive, protests this decision, but his driver reminds him that the line has to be cleared.

Henry reluctantly and fearfully enters the tunnel with the trucks he brought the workmen in, only for the blockage to push him back out again. Both Henry and the foreman are surprised to discover the "blockage" is a large, cross elephant that had escaped from the circus. The workmen offer the elephant some cake and water to calm him down. However, Henry accidentally startles the elephant by letting off steam, causing him to spray Henry with water. The elephant is soon reunited with his keeper, but Henry is most upset by what happened.

That evening, Henry tells the other engines what happened. Although Gordon and James feel sorry for him, they continue to tease him. Thomas, however, praises Henry for his bravery and how well he handled the situation. 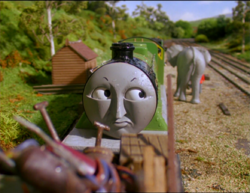 Retrieved from "https://abcforkids.fandom.com/wiki/Henry_and_the_Elephant?oldid=63821"
Community content is available under CC-BY-SA unless otherwise noted.