Johnson and his friends are toys that belong to a boy named Michael, unseen except for when he sleeps in his bed. They reside in his bedroom, but do not move or show any signs of life until he has left the room or has fallen asleep. Each episode involves a story about the toys and it will usually have an educational message to convey to the viewer.

The series is aimed at children less than five years old, and plays upon their fascination with the notion that toys come to life while they are gone. However, the stories often have a deeper message, and sometimes they are very poignant. 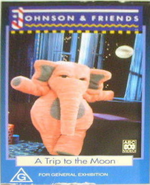