After beating Gordon the Big Engine in a race to Vicarstown Station, Thomas the Tank Engine is introduced to Gordon's brother, The Flying Scotsman, who is taking part in The Great Railway Show on the Mainland, encouraging Thomas to try and take part as well. Though every engine on Sodor wants to take part ("Will You Won't You"), Sir Topham Hatt has not made up his mind yet, and Thomas fears he won't be picked to go to the competition. But after getting an idea to be streamlined for the competition ("Streamlining"), he passes his idea on to Sir Topham Hatt, who chooses Gordon to be streamlined instead.

At Brendam Docks, Thomas has a run-in with several of the competitors for The Great Railway Show when their rail ferry docks there by mistake, and as a result, one of them is left behind. Ashima, a beautifully-painted tank engine from India accidentally bumps Thomas in her hurry to try and make the ferry, nearly pushing him over the edge into the water. When he looks up and sees her for the first time, he is instantly captivated by her. This first attraction makes him very uncomfortable as he reacts indignantly out of embarrassment and quickly retreats from the docks. At the shunting yard, Thomas complains to Percy about Ashima, desperately trying to find something wrong with her, yet unable to explain why he is angry. Phillip suggests that Thomas stay away from her.

Ashima is lost and the other engines are too busy to help her get to the mainland. She sees Thomas once again in front of Kellsthorpe Station where she hints once more for help. Annie and Clarabel, immediately noticing this new weakness in Thomas, purposely tease him about the two of them going to The Great Railway Show together. Completely beside himself, he stammers and blushes uncontrollably and is unable to help her as the whistle blows and he hastily leaves the platform. Whilst purposely goading him about her beautiful paintwork, Annie and Clarabel give Thomas the idea to be similarly painted so he can enter the competition. Thomas abandons them at Maron Station and heads to the Steamworks. At the Steamworks, Thomas suggests to Sir Topham Hatt that he have an engine enter the Best Decorated Engine competition. Meanwhile, at the Dieselworks, Diesel devises a trick that involves disguising Den, Dart, and Paxton as trucks, so as to trick Sir Topham Hatt into entering him into the competition instead of Henry ("I'm Full of Surprises").

Back at Maron, Thomas sees Emily and James, who tell him that Sir Topham Hatt has chosen them to painted. He also learns that Ashima took Annie and Clarabel and has been running his branch line in his absence, much to Thomas' anger, but Annie and Clarabel soon scold him for abandoning them. Thomas finally reveals to Ashima his insecurities about not being good enough to be entered into the competition and she consoles him ("You Can Only Be You"), saying that she finds him perfect just the way he is and that he should just be himself. She suggests he partake in the Shunting competition.

At Knapford Junction, Diesel's trick goes awry when Thomas tries to practice shunting with them. His buffer beam gets damaged in the crash, and his repairs mean he will not be able to go the competition. Sir Topham Hatt reveals he was planning to enter Thomas into the shunting challenge the whole time, but because of his repairs, Percy will take his place. However, upon learning that Gordon left without his safety valve being properly installed while he was being streamlined, Thomas rushes to the mainland to deliver it to him, despite not being fully repaired.

At The Great Railway Show, Henry loses the strength competition, James and Emily lose the Best Decorated Engine award and, due to not waiting to have his safety valve installed, Gordon's boiler explodes and he loses the race ("The Shooting Star Is Coming Through"). With Percy's insistence, Thomas takes his place in the shunting competition, but sacrifices his win to Ashima in order to save her from crashing into a derailed flatbed. However, the judges decide to award Thomas the win alongside Ashima for good sportsmanship. Sir Topham Hatt and the other Sodor engines are very proud of Thomas.

With The Great Railway Show over, everyone is helping Thomas to try and find Ashima so that he can say goodbye when Sir Topham signals for his engines to return to Sodor. Extremely forlorn, Thomas thinks he has missed his chance until he hears her singing as she fills up with coal. Elated, he invites Ashima to come back to Sodor with him, allowing them to spend some more time together before catching her rail ferry back to India from there ("Be Who You Are, And Go Far").

During the credits, Diesel, stuck in a crate, calls for help as he sails away on a ship leaving Sodor. 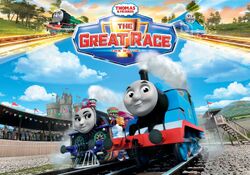