Information on all VHS and DVD releases of "The Wiggles Movie".

It contained an exclusive introduction by The Wiggles (on the set of Toot Toot!).

"Buy it now on video"

Award of the video on "Hey Hey It's Saturday"

For unclear reasons, Fox re-released The Wiggles Movie on VHS in 2000. It removes all the previews as well as the introduction, despite keeping its mention on the cover. The opening only retains the Warning Screen, Copyright Protection Information, 20th Century Fox Home Entertainment logo, and Rating, with the addition of a Feature Presentation logo.

This was the last release to contain the original version of The Wiggles Movie, before the "Magical Adventure!" version was introduced.

The first DVD release in Australia, released by Fox on November 11, 2003.

The DVD seems to have been prepared by The Wiggles, as the menus and subtitles generally match the style of DVDs they released through ABC at the time. This may be the reason why the "Magical Adventure!" version was used, as Fox would have likely never even had access to the version created by HIT Entertainment had The Wiggles not given it to them.

Over time, it stopped being printed with the inside cover containing the song list, and was eventually replaced by a version with an updated "G" rating on the front and back cover. 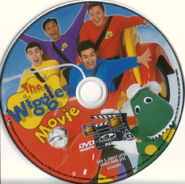 On July 5, 2006, Fox released a new version of The Wiggles Movie DVD as part of their "Child's Play" series.

On a supposedly more scratch resistant disc, the movie starts as soon as the disc is read and plays over and over again until you stop it. Two copyright warning screens are played between each loop of the movie. The DVD menus, which now lack animation, can be accessed by hitting the Menu button on your remote. The extras, aside from the Song Jukebox, are removed, although the Jukebox now works more like a Scene Selection feature as the movie continues playing once the song is over. 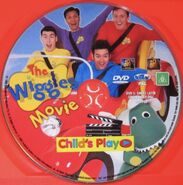 HIT Entertainment first released The Wiggles Movie as "Magical Adventure! A Wiggly Movie" in the United States and Canada on February 4, 2003.

Differences between this version and the original include replacing the title card, moving the first scene (of Wally in Cecil's office) to after The Wiggles preparing to perform for Mrs. Bingle's class, and strange cropping throughout several scenes, most notably those taking place at the Sandlot and Wigglehouse. The HIT Entertainment logo was also added to the end of the credits.

The DVD is much more bare bones than the one Australia received later that year. It features no subtitle tracks (although it does contain closed captioning), and has only one menu which houses the movie and storybook, which is its lone extra.

As with most DVDs released by HIT Entertainment, a version with the 20th Century Fox logo and added copyright notice on the disc art was introduced in 2006. There is no other difference, the cover art and contents of the disc itself remain identical. 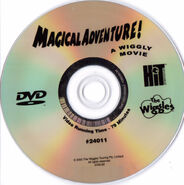 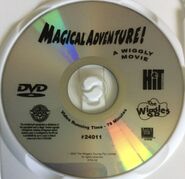 The only difference between the VHS and DVD's openings are the presence of the menu on the DVD.

When the rights to The Wiggles' video catalogue were transferred to Warner Home Video in 2007, they re-released Magical Adventure! on October 9 of that year.

The DVD is mostly identical to the previous one. The 20th Century Fox logo is cut out (thus it skips straight to the title) and the HIT Entertainment logo is cut out at the end as well. Warner's own previews replaced HIT's, this time playing before the menu rather than after the movie is selected. 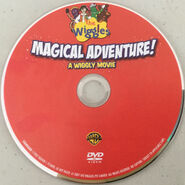 HIT Entertainment released Magical Adventure! in the UK for the first time on June 20, 2005, on a DVD and VHS also containing Wiggle Time!.

The movie itself is presented nearly the same as in other DVD releases, albeit with the 20th Century Fox logo removed from the beginning. 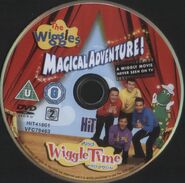 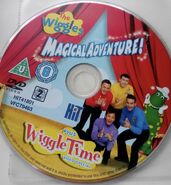 Inside of the Insert

HIT Parade (see below for all previews)

For more information and images, see 2 on 1 - Bumper Double Bill.

On July 28, 2008, Magical Adventure! was released again on DVD in the UK. This time it appeared on its own, packaged in a handle case.

It retains the 20th Century Fox logo this time, although the 2001 HIT Entertainment logo was cut from the end as it was now outdated. It also lacks the subtitles that the previous DVD had. 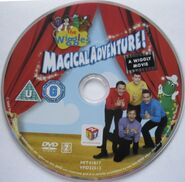