ABC For Kids Wiki
Register
Don't have an account?
Sign In
Advertisement
in: Thomas & Friends episodes, Episodes, 1987,
and 2 more

Thomas and the Trucks

Thomas and the Trucks

Thomas and the Trucks, retitled Trouble for Thomas in American releases, is the sixth episode of the first series. It is based on the story of the same name from the Railway Series book Thomas the Tank Engine.

Thomas is fed up with his job of shunting coaches and complains endlessly to the other engines about it night after night and wishes that he could see the world for a change. The engines get incredibly annoyed, for they have to listen to Thomas' grievances all night long. One night, Edward comes to the shed and feels sorry for Thomas. He offers Thomas his goods train, while Edward would shunt coaches. Thomas happily agrees.

The next morning, their drivers agree and Thomas sets off happily for the yard. Troublesome Trucks are very silly and noisy, talk a lot and often do not attend to what they are doing. They also often play tricks on engines who are not used to them. Edward has warned Thomas to be careful before his journey, but in his excitement, Thomas does not listen. Thomas starts to pull the train, but the trucks are not ready. Despite their cries to stop, Thomas just ignores them as he puffs out of the station rather stubbornly.

Thomas goes faster and faster along the journey, but the increased speed makes the trucks get very angry. Thomas eventually slows down at Gordon's Hill, but as he applies his brakes at the top, the trucks begin to push Thomas down the hill. Thomas loses control of the trucks as they rush into Maron. He swerves into a siding at the goods yard and barely stops in front of the buffers, narrowly preventing an accident.

The Fat Controller, having seen Thomas arrive, questions him why he came in so fast. When Thomas explains what had happened, the Fat Controller tells Thomas that he has a great deal to learn about trucks. After pushing them for a few weeks he will know almost as much about them as Edward, only then can he become a Really Useful Engine. 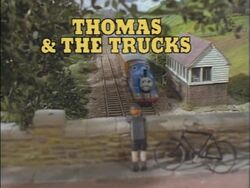