ABC For Kids Wiki
Register
Don't have an account?
Sign In
Advertisement
in: Videos, The Wiggles videos, 1996 videos,
and 8 more

Note: All songs are taken from the album Wake Up Jeff! except when noted otherwise.

Intro - An alarm clock is flying around ringing while it is on the table. The video title moves up and Jeff was woken up by doing a big yawn after.

The Wiggles introduce themselves. When they ride in there Big Red Car, they like to say hello to everyone.

Greg and Henry say hello to everyone.

Greg tells the other Wiggles to stand still like a statue. Murray does a strongman pose, Anthony stands on one leg. Jeff sticks his arm out like like a showman. Then Greg asks the viewers to tell him if any of the statues are moving. Of course, all the other Wiggles statue dance around, but when Greg hears from viewers, he turns around they assume their original positions. On the third try he finds out viewers is right. Afterwards, Greg says, "Let's do statues together, everybody" which means it's time to sing.

The Wiggles introduce Captain Feathersword, but he answers with "Bing Bang Bong" and other nonsense phrases. They ask him what's up with that? He answers, it's a pirate song. Let's dance a pirate song together!

Anthony and Murray introduce Dominic, who is holding his baby girl Ashleigh with his left arm and a trumpet on his right. Anthony and Murray ask him questions about playing the trumpet and Dominic plays a few motifs. Everyone's wearing a green hat, so It's time to do an Irish dance, featuring a bunch of the little girls from the dance school.

A alarm clock goes pass and everyone says "WAKE UP, JEFF!!!" to wake Jeff up.

Jeff asks Dorothy to dance and Dorothy does a few dance steps.

The Wiggles and kids are in a camp site singing about going for a ride on a boat out in sea.

This is Dorothy's favourite dance.

Greg and kids are doing this dance and Greg does tells them things that he can do in this song.

Wags is barking in the background and Anthony says that who is that barking and it's Wags the Dog.

Greg, Anthony and Murray are standing with an empty glass box and hear some snoring. The glass box is the of a coffin (think Snow White) but no one is inside the box. Greg has Anthony and Murray cover the box with a drape, spin it around and chants some magic words. They lift the drape and Jeff is there, but he's asleep. They ask everyone to wake up Jeff. Jeff wakes up, wondering what he's doing in a box.

After when they wake Jeff up. Murray told him to not fall asleep again and said we neeeeeeeeeeeeeeeeeeeeed. While he was twirling his arms round and round until he stopped a said YOU! for the next song.

It's time to say goodbye, but Jeff is still asleep on his bed, so The Wiggles decide to do a goodbye dance and they will see if that wakes Jeff up.

Close with the goodbye dance with "Christmas Picnic" for background music. And then, everyone yells the final "WAKE UP, JEFF!!!!!!!!!" after they clap they're hands three times.

After the video, it's time to go to a Wiggles concert. The Wiggles are in backstage while they are warming up their voices by singing Rock-a-Bye Your Bear. After their voices are warmed up, they have to make sure that their clothes and hair are alright. Wags the Dog is also in the room, polishing Henry's shoes. Jeff has fallen asleep while sitting on a chair. They call us to Wake Up Jeff. Jeff arises and they're ready to go on stage for the concert.

This video, Wake Up Jeff!, was originally quite different as seen in a rare promo. The Wiggles wore T-shirts, shorts and coloured sneakers and the songs were performed on different sets. Additionally, Henry's original costume was used as it was on the cover. It's possible The Wiggles decided to reshoot the video after not liking their new look and decided to go back to the old one.

It is unknown if it was going to have any more or less songs than the released version, as all we see in the trailer are short clips from "Everybody Is Clever", "Bing Bang Bong (That's a Pirate Song)", "Wake Up Jeff!" and "Dorothy, (Would You Like To Dance?)". It's possible that at the time, these four songs were all they had filmed before re-shooting the video, but there is no evidence supporting or denying this. 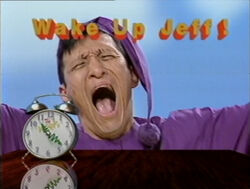