ABC For Kids Wiki
Register
Don't have an account?
Sign In
Advertisement
in: The Wiggles videos, Videos, 2001 videos,
and 5 more

Lights, Camera, Action, Wiggles! (2003)
"Wiggly TV" is a compilation video of episodes from TV Series 2 released in 2000 on DVD and 2001 on VHS. The VHS version contains two episodes, Playtime and Wiggly History, as well as an electronic storybook and bloopers. The DVD version also contains the episode Family, plus DVD-ROM features.

The storybook plays between the two episodes, cutting out the credits of the first. The bloopers play after the second episode, but before its credits sequence (of which the copyright is updated to 2001).

The three episodes can be selected individually or played uninterrupted, complete with credits sequences (which remain dated 1999). The bloopers are given their own spot on the main menu, while the storybook is listed in Extras with Sing Along songs and DVD-ROM info. 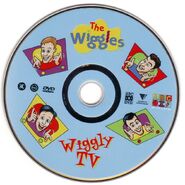 Sing Along with The Wiggles

Read Along with The Wiggles

There is no music heard in any menus, but there is narration from Greg Page describing what you can do at the beginning of each menu.